Kickstarter, Cooking, and Quests: It’s the VMD3 for September 10th

It's the weekend, and that means another edition of the Village Monsters Dev Diary Digest (VMD3)

The marathon continues! This past week saw the release of the latest demo, and it was a big one.

I want to thank all the people who took the time to share feedback! You are making Village Monsters a better game. You can expect another release tomorrow that contains more features and bugfixes reported via feedback

The Kickstarter is coming soon. Real soon. As in, in the next 48 hours! I'm so pumped. And nervous. Mostly pumped!

As with last week I'm going to keep the text at a minimum and make this a screenshot blitz. Let's get to it

I did a fair amount of work on the last hobby prototype, Cooking. It's far from where I want it, but it'll improve over time

Remember the potion system? I went and combined it with food effects to open the door for all sorts of goofy fun. Snowberry Shrooms now properly chill you to the bone, while Spicy Shrooms put an extra kick in your step

A new area, the forest, has been implemented. This is also your first chance to investigate some of the glitches and faults ruining the world outside the village 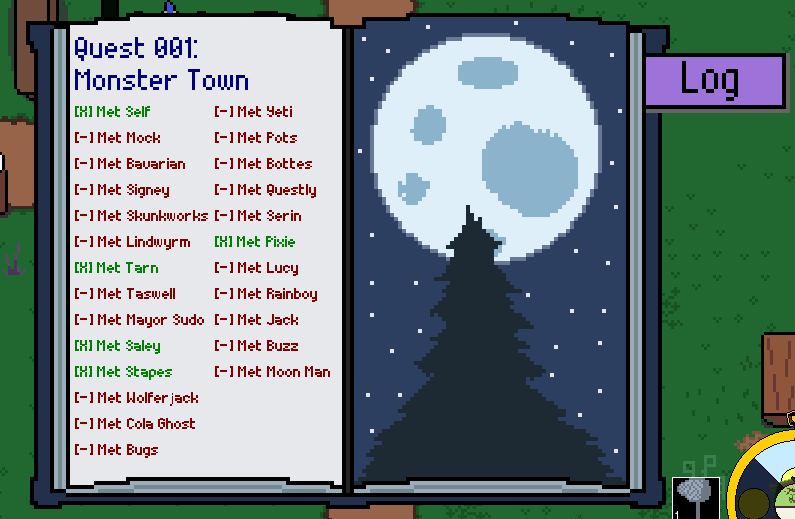 The first of many quests have been added - meet all villagers in town! There's no reward for finding them all (yet...), but it's a good way to track your progress

Finally, more helper text has been added to Home Customizer mode. You also are automatically placed in this mode when placing a new piece of furniture