For this update we’re going for all killer no filler: it’s a short one focusing on the timeline leading up to launch.

As I’ve mentioned before, for the past year I’ve been juggling dual responsibilities as both an indie game developer and a new stay-at-home dad. It’s been pretty great, but my day-to-day work schedule has been… well, chaotic.

Thankfully order is to be restored – at least temporarily. My wife – who is a teacher – will soon have the summer off. This is good news for a number of reasons, but for you all it means I can focus entirely on finishing development of Village Monsters.

With this in mind, let’s take a look at the timeline for the next several months.

I’m planning to have quite a productive summer. June and July will be spent on wrapping up the remaining features & systems with the goal of being feature complete by the end of July. This same month I plan on releasing a new demo out into the wild, though there’s a chance it slips as the main priority will be on the aforementioned completeness.

August will be spent on lots and lots of content – creating new content, editing existing content, and so on. Examples of this include dialogue, collectibles, flavor, and secrets. Realistically, August will also be spent fine tuning features, but the idea is to add or change as few things as possible.

This brings us into the fall. My ultimate goal is to enter September with a finished game that I can poke and prod and break and fix. At some point I will also need some volunteer play testers for both feedback and testing of the near-finished game.

This work naturally leads to a launch date sometime in October or November. My plan isn’t too complicated – I will continuously test and polish the game until it feels right and then unleash it into the world.

This is a firm plan that is unlikely to change too much. I’m finally close enough to that fabled finish line where even a hiccup here or there isn’t likely to cause much mischief.

Village Monsters will release as a complete and polished game, but there is always more to do!

December and January will be focused on fixing any bugs and annoyances that I missed in testing. After that I have a laundry list of ideas for future updates – things that include some kind of multiplayer, new areas to explore, and post-story content.

I can’t wait for you all to get lost in the immersive world of Village Monsters. Until next time! 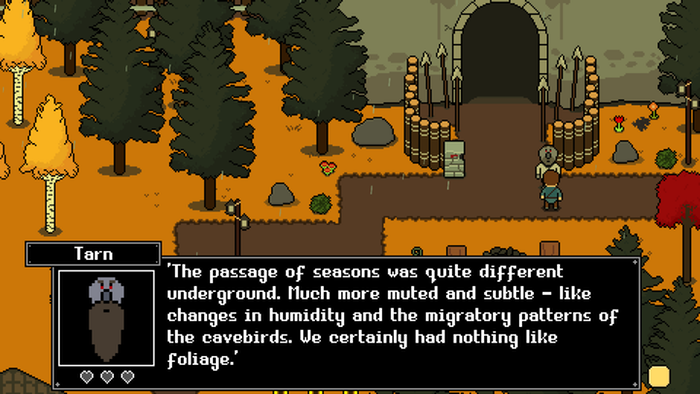