I really love the passage of time in video games. Day / Night cycles, seasonal changes, NPC schedules, and so on – I eat that stuff up.

There was a time in the late 90s and early 00s where it seems every game – regardless of genre – included the passage of time as a big bullet point. It was fantastic time to be alive!

I’ve no doubt already spoken at length about the time system in Village Monsters as I’ve been tweaking and perfecting it since the very start, but I’ve yet to put it all in one place in an easily digestible post.

Let’s start with how time is structured!

The calendar of Village Monsters is kept purposefully familiar: there are four months in a year which correspond to each of the four seasons. Each month has its own distinct vibe and flavor that makes them dramatically different from each other.

A month has 4 weeks which in turn consist of 8 days. Here we deviate a bit from reality to include an ‘extra’ 8th day called Baldursday. This new day is sandwiched in between Saturday and Sunday and is meant for relaxing and catching up on projects. It’s often the day of the week that village holidays and festivals fall on. 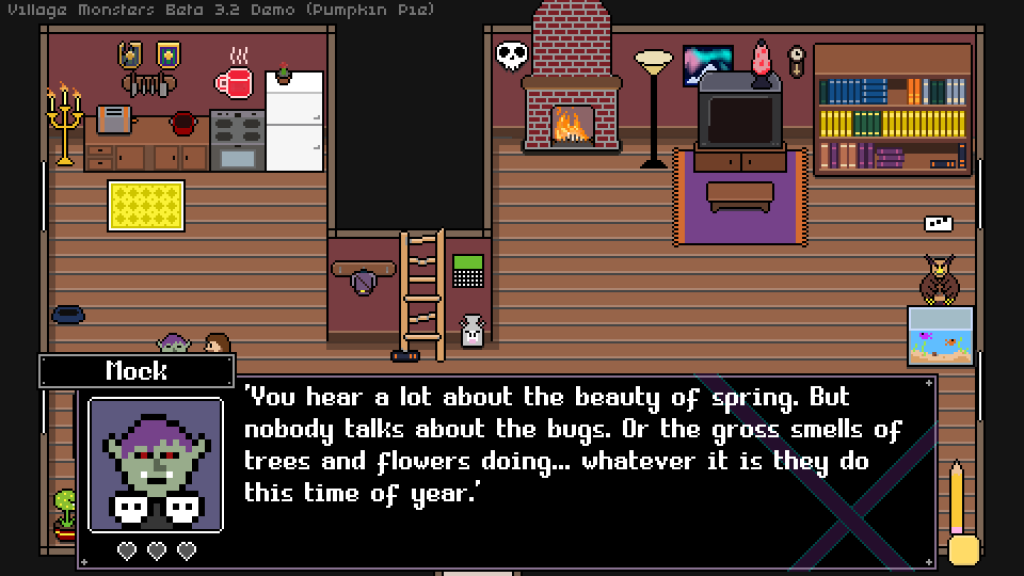 A day in Village Monsters is split up into four main slices – Morning, Afternoon, Evening, and Night. While it’s far more granular behind the scenes, I purposefully kept it simple so it’s easier to keep track of things like villager schedules, critter spawning, and other time-sensitive tasks.

The exact length of the day is incredibly important and is something I’m constantly tweaking. It currently sits at 12-15 minutes. This’ll be constantly adjusted right up to release, but my goal is a length that isn’t too rushed.

As in real life, a ticking clock and changing calendar means big aesthetic changes. The sun rises and sets which changes the lighting. The tiles change with the season, as do the look of vegetation and buildings and decorations. Even the music changes to fit the mood. 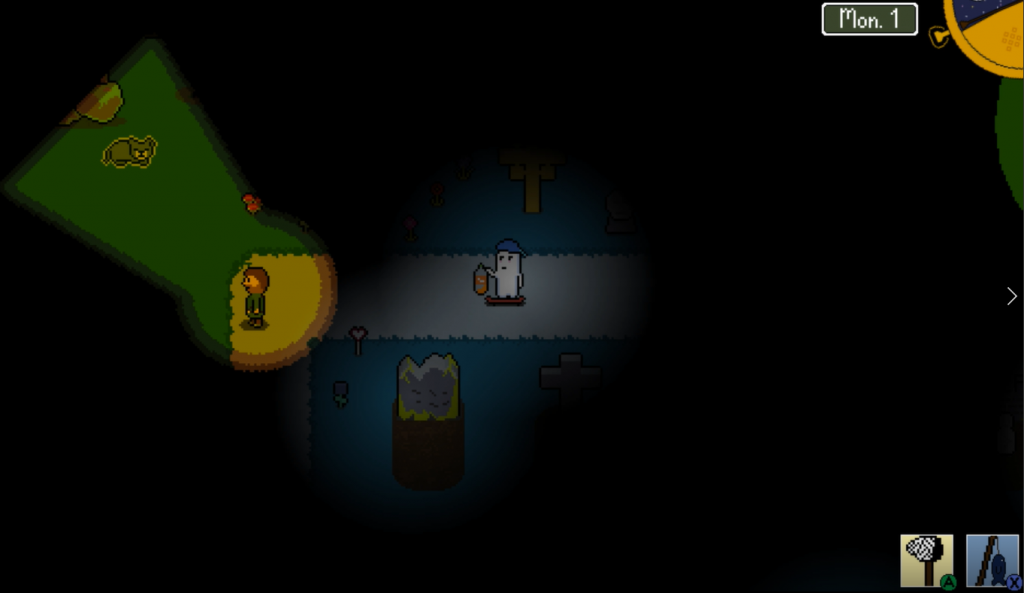 It’s not an exaggeration to say that every single piece of the game is dependent on the time and season. Here’s some of them:

Villager schedules have been a big priority these past couple weeks as it’s one of the last technical hurdles I have. It’s a humongous task and unfortunately I’m not yet ready to share what it looks like, but even the incomplete (and wonky) system has breathed so much life into the game.

The final system is going to be pretty rad. 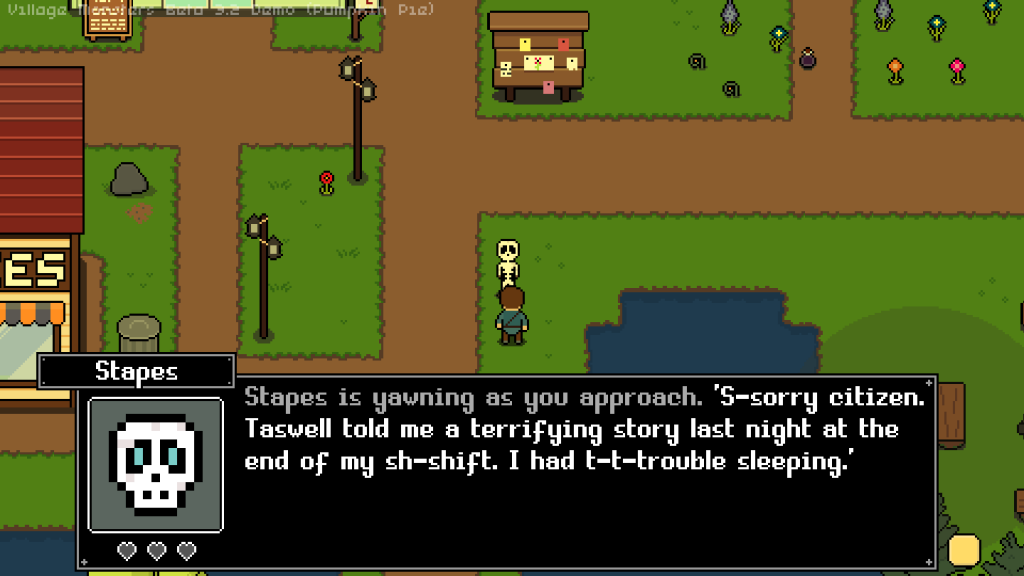 The biggest draw to time cycles is creating a strong sense of immersion. But this is still a video game – and in the case of Village Monsters, a video game that’s canonically coming apart at the seams. That means it’s ok to break some 4th dimensional rules every now and again.

There are a number of special items you can buy or craft that control how fast or slow time passes. 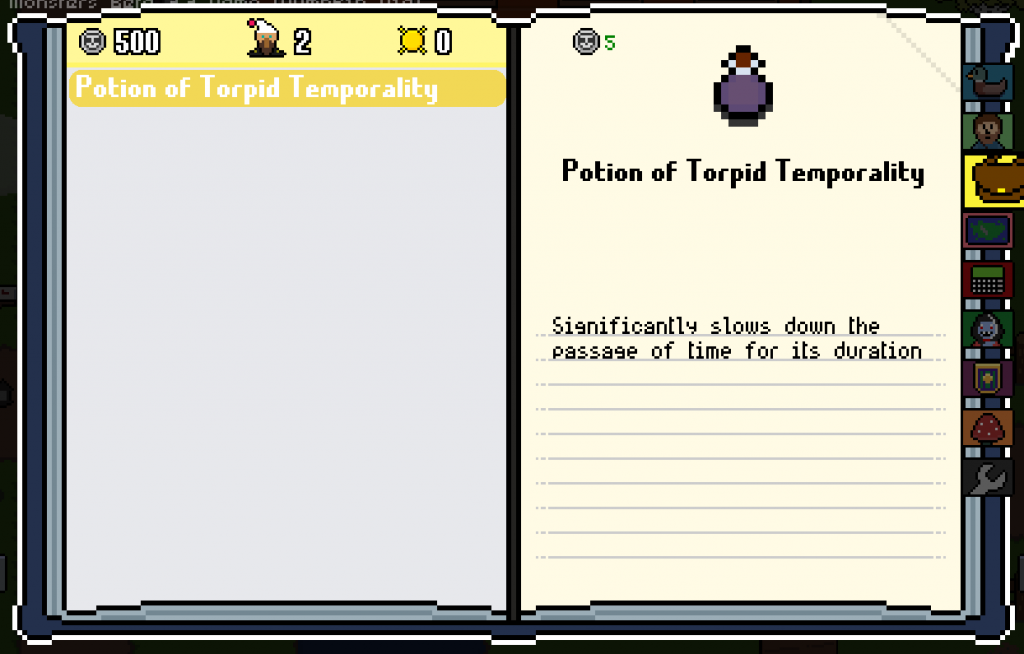 You may also find certain areas of the world that aren’t playing by the same rules of time; some areas may be locked into a certain season all year round. Others a certain weather pattern. This can be especially useful late game when you’re trying to find specific items or critters, fish, and mushrooms.

Finally, here’s a question I get a lot: is there a time limit as far as the story goes?

The answer is no! Story beats (and progression in general) are independent from the passage of time, so you won’t bump against any kind of restrictions. Take as long as you’d like. 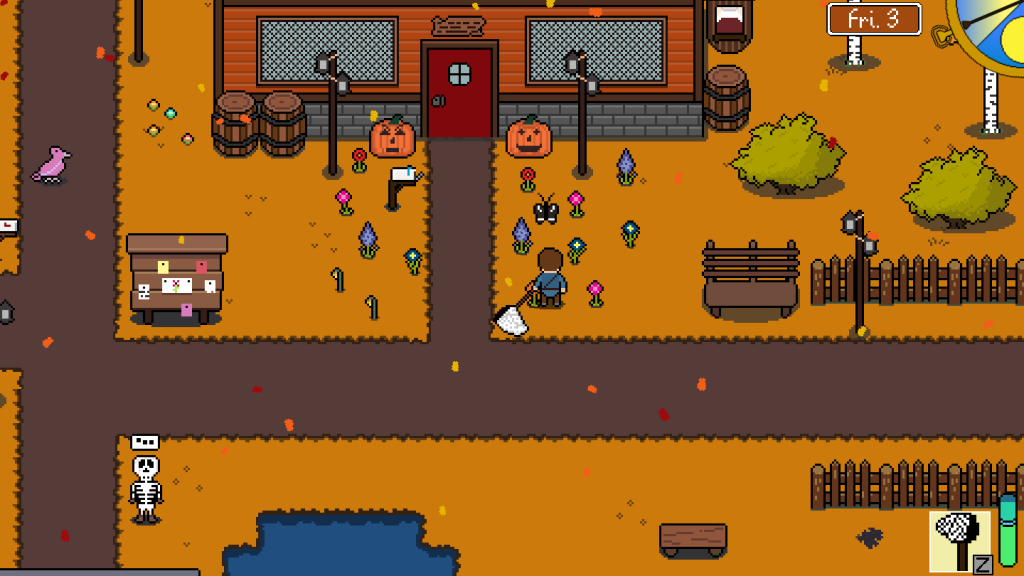