There’s no way to actually prove this, but I’m pretty sure more people have played fishing mini-games than have actually gone fishing.

You can fish in Zelda, in Nier, in Red Dead Redemption 2, in Pokemon, in Deadly Premonition, in Torchlight, in Yakuza. You can hardly walk into a Gamestop without tripping over a pile of rods and tackle boxes. 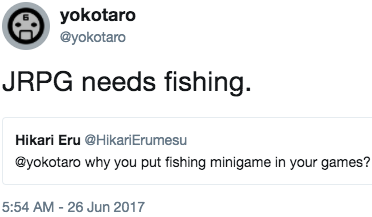 And of course fishing is especially prominent in life sim games like Animal Crossing, Harvest Moon, and Stardew Valley. Village Monsters is no different – fishing was one of the first hobbies I added to the game.

There’s a lot to draw inspiration from, and if it seems the tone of this post is overly negative it isn’t because I don’t like fishing mini-games… it’s because of how intimidating they are! With so many different standards and expectations there are almost too many options, and this left me feeling paralyzed when designing the system for my game.

The good news is I’ve finally settled on a system, and I’m super excited to talk about it.

But first let’s talk about how bad of a designer I am.

I prototype every feature – often before I even analyze or document it – and fishing was no different. In a lot of ways prototypes are ‘meant’ to fail (seeing what doesn’t work is more valuable sometimes than seeing what does), but my fishing prototypes took the word ‘failure’ to a whole new level.

My very first prototype was similar to what you find in Breath of Fire. You’d be presented with a side view of the body of water you’re fishing in and your goal was to guide your hook to a fish and reel it back to shore.

It was… fine. It was certainly unique compared to my contemporaries, but the more I played with it the more I realized this wasn’t necessarily a good thing. It was equal parts clunky and boring, and I scrapped it shortly before the Kickstarter.

The prototypes that followed were all over the place. I experimented with “fish HP” and “rod HP”, I put in timed button challenges, I tried out things like line strength and fish stamina and generated all sorts of random numbers.

I wanted to capture the full cycle of fishing – the relaxation of waiting, the excitement of hooking, the struggle of reeling in a big one – but nothing I tried was working. You might even say I was floundering… heh… heh… ugh.

Then one day inspiration struck. Perhaps it was Poseidon himself that whispered in my ear, or perhaps it was that 4th Monster energy I just drank. Whatever the case was, the outline of fishing should look like revealed itself before me anchored by three words…

Fishing in Village Monsters can be broken up into three distinct phases which I lovingly call Dash, Mash, and Clash.

After casting your line in a body of water the music dims and you can let your mind wander as the outside world fades into the periphery – that is, until a fish bites. That’s the Dash, referring to how you must quickly hook the fish before it gets away.

After hooking the fish it’s time to Mash, which is exactly what it sounds like. Your job is to reel in the fish as fast as possible. There’s no subtlety required, so mash that reel button as hard as you can. A little fishing meter tracks your progress.

Of course, most fish won’t be too pleased about the hook in their mouth and they’ll often try to fight back. This leads to our next stage, Clash, which finds you being challenged with a series of button prompts as the fish attempts to get away.

If you miss a prompt then you’ll start losing the progress you made reeling the fish in. Miss too many and the slippery fish will make their escape..

However! If you manage to get a “Perfect” during this stage then the fish’s defenses are shattered which makes it much easier to reel in. This gives the clash stage a high risk / high reward component and acts as a test of skill compared to the previous test of stamina.

These two stages cycle back and forth until the fish is caught or gets away. How often they cycle and for how long depends on the fish. Easier or smaller fish need less reeling in while legendary fish require several clashes before they submit.

And there you have it! Fishing is finalized in forthcoming folly, Fillage Fonsters.

Finalizing any gameplay mechanic is sorta like writing the 1st draft of a story – it’s a great feeling of accomplishment, but there’s lot of editing and polish to do.

Now that I have all these levers and nobs to play with it’s time to give each fish a “personality” – heavy fish that are hard to reel in, fish with extremely quick ‘hook windows’, and so on.

There’s also an entire range of possibilities for upgrades: lures that attract fish faster or rods that make reeling in easier. Then I can start looping back into other parts of the game, like a potion that slows down the clash stage, or a mushroom that attracts rare fish when used as bait.

You’ll be able to play with the new fishing system yourself once the latest Village Monsters demo hits later this month.