Building a Village - Have a Heart to Heart

There are 32 monster pals in Village Monsters that you can befriend, but until now there hasn't been much of a benefit beyond watching their little heart icons fill up.

That's about to change.

Today's dev diary is going to feature one of the biggest and most exciting new additions coming in Village Monsters v0.75: Heart-to-Hearts events!

As you deepen your friendship with a villager you may sometimes trigger special events called Heart-to-Heart conversations. These are unique cutscenes with each villager where they open up to you about a problem they have or a goal they're working on.

Most Heart-to-Hearts take the form of a short story arc for that character, and no two events are ever the same - they depend heavily on the villager themselves.

Bugs needs your help in hunting down a rare (and very deadly) critter. Mayor Sudo wants you to "volunteer" as campaign manager for his reelection. Golbrick is trying to find ways to deal with his pessimism. Oponna has a lead on where to find the lost treasure of Pine Tar Percy. 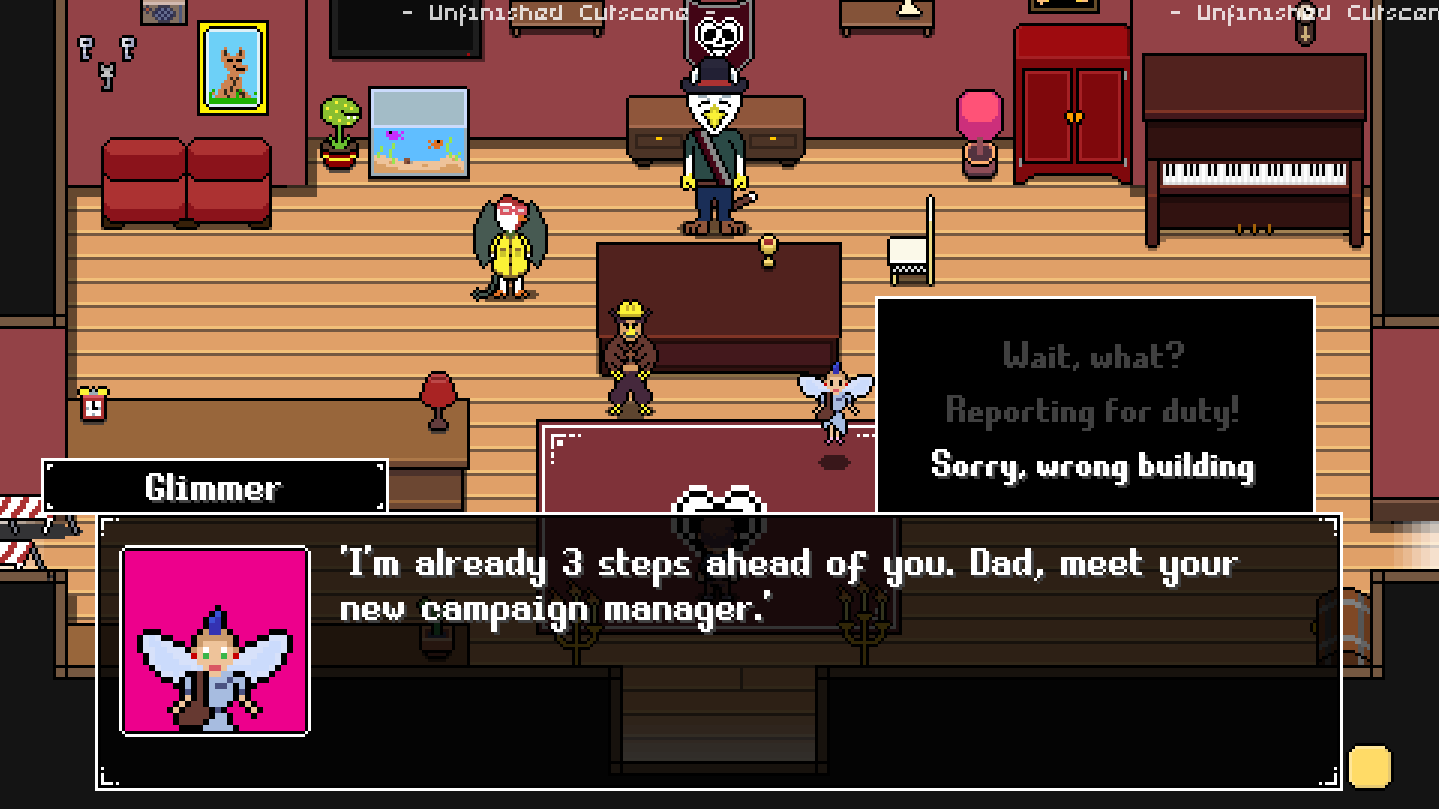 Heart-to-Heart conversations can also result in the personal growth of the villager which can change many things: their personality, their daily schedules, even their involvement in story events. This feature didn't make it into v0.75, but it's something that I should be able to finish in the next big update.

I don't want to get too into ~spoiler territory~, but you can expect multiple Heart-to-Heart events with every single villager. Yep, all 32 of them! It's quite the undertaking, and the initial release will only include a small handful. New events will be added throughout Early Access (including retroactively).

I expect that for many players, unlocking and enjoying Heart-to-Heart conversations will comprise the bulk of their playtime.

While talking with a villager you may notice that they have some sort of "lock" placed on their heart icons.

These are called Lockhearts, and they represent a blocker that stops villagers from further opening up their hearts to you. You'll be unable to progress your friendship any further until it's cleared.

Don't fret! It's not a bad thing, it just means the villager is busy processing their own personal situation. In fact, Lockhearts almost always indicate that a new Heart-to-Heart event is ready to be viewed. These events let villagers address their problems and deepen their friendships with you

However, there are other situations where a Lockheart must be cleared via another method. Some villagers may just need a little extra time to pass, others may require you to first reach a specific friendship level with another villager, while some may even require a special item, village upgrade, or something else entirely.

From a game design perspective, Lockhearts allow me to make villager relationships more natural and meaningful. More Lockheart features will be added in later updates.

Dating villagers will use a very similar system as normal Heart-to-Hearts, but I'm not quite ready to reveal this in a public release. You'll have to wait just a little longer.

But you won't need to wait very long for everything else I've described. Village Monsters v0.75 is releasing this Thursday, June 25th.