For a very long time now - as far back as March 20th - I've wanted to make big, sweeping changes to Village Monsters. Well, today seemed as good of day as any to finally announce these exciting changes.

Living in a forgotten game world is cool and all, but how would you like to live on a deserted island? An island that you could personalize, decorate, even terraform, and it all happens in real time? Is such a thing even possible with today's technology?

These are questions nobody has been brave enough to ask - until now. Introducing Village Monsters: Fresh Frontiers!

The eponymous village of Village Monsters is transforming into an island getaway, so I've added a host of new features to support this new venture.

The first is called the "Better Than Nothing" (BTN) crafting system! With BTN, you can craft new items and furniture using raw materials found around town. These user-created items are very ugly, break quickly, and nobody likes creating them - but they're better than nothing!

The BTN system also lets you terraform your island - or the entire world - to your heart's content. Simply boot up your copy of GameMaker Studio 2, load the Village Monsters source code, and go to town - literally!

It's easy to make anything into an island - just add water!

Don't know how to use GameMaker Studio 2? No problem - I don't either!

One of the bigger things I'm working on is a "real life" time system. This means that one minute in real life equals one minute of in-game time; the game world even keeps going when you're not playing.

To ensure maximum realism, I've programmed advanced AI for each villager so that they can feel new emotions like abandonment, loneliness, and despair. Just be sure to never change your system's date or time! 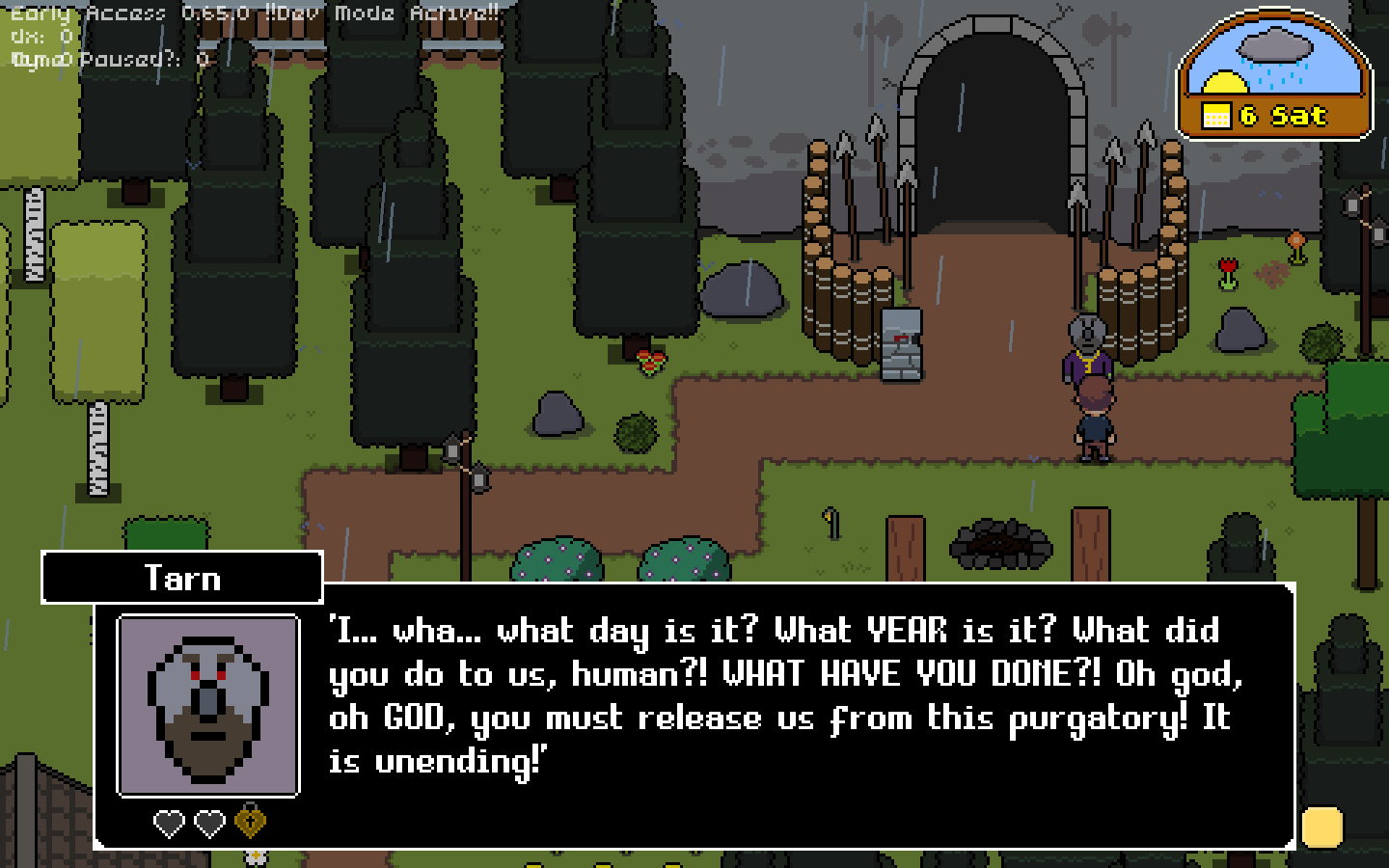 Let's talk multiplayer. Frankly, it's a little embarrassing to be releasing a game in 2020 that doesn't have a robust and fully featured online multiplayer mode. I'm a solo developer, so it's not exactly easy for me to make such a thing... but I think I've found a pretty sweet workaround.

Do you have a USB flash drive? Sure you do! Check your junk drawer, everyone has at least a couple these days.

Just plug it into your computer, copy over your VM:FF save file, and mail it to your friends! After 3-5 business days it should arrive at your friend's place where they can load up your island and explore it as much as they want.

After they're done, they just mail the USB drive back - this time with their own save file!

We're living in the future! The best part: no subscription fees!*

While it may seem like a bad idea to reinvent and re-brand a game mere months before it releases, I think you'll agree that these changes to Village Monsters will be well worth it.

Look forward to hearing more info at a later - oh, wait a sec, the UPS guy is here. It'd be rude not to answer the door. Computer, pause dictation.

Well folks, it's been several hours since I first made this post, but I'm pleased to announce another brand new update that supersedes everything I just said. Surprised? Don't be! Things move pretty quickly here at Village Monsters HQ.

I'm beyond pleased to introduce to you Village Monsters Royal! Bet you never saw that coming.

Details are still in a rough draft form, but I'm scrapping the whole island idea in favor of a high school! You'll be able to take classes, date your classmates (who are still monsters), and even fight demons using a fully formed JRPG combat system! Please enjoy this new logo while I flesh out the rest of the details.

this is amazing hahaha I love it thanks man